In a petition signed by its executives led by Mr. Isaac Annobil and cited by MyGhanaMedia.com / Ahenkan 93.3 FM alleged that since the appointment of Madam Victoria Adu, in 2017, there was nothing to boast of as an initiative of the Assembly and achievement of the MCE thus must be shown the exit.

According to the youth, the MCE did not deserve a re-appointment due to his “incompetence, divisive leadership.

Find below the full Petition to the President

Compliments of the Season to you from the entire membership, Patrons and Council of Elders  of the Akyem Oda Youth Association.

This PRESS CONFERENCE is pursuant to a petition sent to the office of the president, H.E  NANA ADDO DANQUAH AKUFO ADDO and Leadership of the Ruling Party at all Levels  ( Constituency, Regional and National ) Dated Monday,5th April,2021 TITLED PETITION AGAINST THE RE- APPOINTMENT OF MADAM VICTORIA ADU- MCE, AKYEM ODA.
Your Excellency, the above mentioned youth group based in Akyem Oda with its membership cutting across major political parties and Neutrals and spread around the world UNANIMOUSLY REJECT any attempt by the Leadership of the Ruling Government across  all levels, to Re-appoint the current MCE ,Madam Victoria Adu for the reasons below.

INCOMPETENCE AND LACK OF VISION
It will interest stakeholders that up to date, one is unable to pin-point any clear program or initiative of the MCE in and around Akyem Oda but except that of Business as usual ways of doing things the old way. No Innovation, dynamism, poor inter-personal Relations with Party and Citizenry etc. Akyem Oda is an ancient city that has gained a name for itself many years ago, yet, politics has not been fair to her among her peers in Ghana. It there behooves on appointing authorities to thoroughly grill would be leaders (MCE’s) to ascertain a clear vision and also having the support of the local people. Ever since Madam Victoria Adu took over as MCE, she has aligned herself to factions of the divided NPP front at Oda, and it has been one conflict or discordant tunes at its best, exposing her Incompetence in the area of administration and conflict resolution etc. This among others accounted for your coming to Oda twice to campaign. She has succeeded in creating unhealthy relationship among the rank and file as a result of failing in her dealings to resource the party adequately. She must be CHANGED

FAMILY AND ‘FAMILY’ AFFAIRS
It is no news in the city of Akyem Oda that the MCE, Madam Victoria Adu has sidelined party faithful’s for her immediate family in the running of the office of MCE. Her personal Driver is her biological son. He was unemployed before his mother took over office, but through the instrumentality of his mother, the MCE, he has been absorbed as a permanent staff of the Municipal Assembly, leaving behind several of the casual workers, who have worked over 5-8 years and counting at the assembly. The MCE’s husband, who is a retiree like his wife, serves as the personal Assistant to the wife and shoves away party faithful’s from accessing the office. School feeding programs allotment has been shared among daughters, friends with her holding a chunk, with the excuse that she remains the woman organizer of the Oda Party. A position she has refused her Deputy from taking over. These can be verified at the assembly and with the Npp fraternity at Akyem Oda. These and many more are reasons why the rank and file of the party at Oda feel neglected and want a CHANGE of the MCE.

ABUSE OF COVID 19 RELIEF PACKAGE
The people of Akyem Oda demand to be accounted to, the usage of funds and items allotted to the municipality. It is Unclear if the purpose for which the items were provided were actually used. The Municipal Coordinating Director among other key leaders of the assembly are been urged to be patriotic as corruption only destroys and not build. Your Excellency, we urge your good office to cause an investigation into the general conduct of the MCE and leadership of the Oda Assembly to regain the trust of the people.

MMDCE’S ARE FOR LOCALS / INDIGENES
For the Local government to be effective and deliver quality service, the locals should be given a greater say and freedom to suggest who for instance should lead them. This could be done through the carrying out of unbiased research. Your Excellency, at this juncture, what does intelligence say about who the people of Akyem oda want as their next MCE? What are the people saying? Is there anything to go by? We trust in the wisdom of the president to listen to what the People want. A few persons must forgo their personal interests only and not rock the boat.

CANDIDATES SHORTLISTED FOR AKYEM ODA MCE POSITION
The NPP in Oda have disclosed that three (3) persons after close of nominations have submitted their credentials for the position. This was done according to rules set by the Regional and National Party. The individuals’ are Name – Home Town

The above named individuals, per the party have signified interest in the position and are all qualified, the question is do they all appeal to the Generality of the people? We shall be very elated to read from a published research/intelligence what the people of Akyem Oda are saying about these candidates. We are of the firm conviction that local governance is played by active and indigenous persons who can perform, carry the people along and bring to realization the vision of the president.

RETIREES AS AKYEM ODA MCE’S
Mr. president, as youth and concerned citizens of Akyem Oda, it will interest us so much and will change the governance dynamics of Akyem oda if you surprise the people with a youthful but tried and tested person as our next MCE. Your Excellency, your Minister for Youth and Sports Hon Ussif Mustapha is about 42 years, Our Brother Kojo Oppong Nkrumah celebrated his 39th Birthday on 05.04.2021, the list is endless of young people you have empowered. Your Excellency, empower the Youth at Oda too through the appointment of an MCE and we shall be forever grateful to you.

The trend of fielding retirees only as MCE’s by both the NPP and NDC have yielded little or no positive results whatsoever. Thankfully, this time, per the shortlist of the local party (If it goes without been influenced), the name of a Young, Energetic, Enterprising and a pure Grass Roots NPP stalwart has been mentioned. We foresee a great change in the development dynamics of Oda if this Youngman is given the chance.

THE YAW OSAFO MARFO FACTOR
The people of Akyem Oda both home and abroad are grateful to their former members of parliament, prominent among them is Hon Yaw Osafo Marfo, a Citizen Of Akyem Awisa in the Current Birim South District, former Minister Education and Sports, Finance and Senior Minister of Ghana. It is no secret your Excellency that Nana Yaw Osafo Marfo is your old time friend, however, the people of Akyem oda have a different perception as far as the development of Akyem Oda both physical and Human is concerned. For a fact, our people have it tied to their aprons that the former MP only adopted a strategy to only build a political empire for himself and family and not Akyem Oda as a whole. Our people feel that Since Nana Yaw Sarfo failed to be elected Flagbearer of the NPP in 2008, and subsequently left parliament, Akyem Oda has been at the receiving end. Yet no one notices, its sons and daughters, politically, are at the mercy of Hon Yaw Osafo Marfo. He has brought down, politically many prominent Citizens of Oda for reasons unknown. We think that he has played his part and must REST.

Your Excellency, we are never suggesting that you severe your relationship with Hon Osafo Marfo but a continuity of the perception held by majority of our people only add up numbers to our opponents politically. Here comes another clear opportunity to appease our people of the undue influence and biases in appointments as far as Akyem Oda is concerned. We want to state so clear Mr. President that the era of individuals choosing their preferred DCE’s and MCE’S should cease as it hinders party cohesion and draws back development, Akyem Oda is a Case study. No one person ONLY must select a DCE / MCE for any locality at all if the NPP wants to break the ‘8’.4

CONCLUSION
Mr President, we can assure all and sundry that if MADAM VICTORIA ADU is re-nominated as Akyem Oda MCE, her REJECTION will be HISTORIC and PHENOMENAL, and it will further spell doom for the local party at the constituency. The Association is ready to embark on series of protests to drive home our demands. We are ever ready also to join forces with your Youthful appointees to better the lot of our people. We thank you, your Excellency and the NPP Government for the bold policies, legacies and programs you have bequeathed to Ghana yet we remind them of the near calamity that befell the Party in the last general elections.

You can count on us anytime to move Akyem Oda forward.

I Don’t Know Hearts Of Oak, Kotoko Is The Biggest Club In Ghana – Fabio Gama 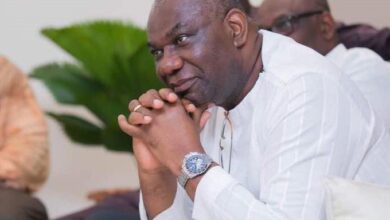 NDC Slams Gov’t, NPP For Blaming Opposition For The Booing At President Akufo-Addo