All is set for the main 2022 National Science and Maths Quiz Competition as the championship is launched with fixtures for the preliminary round of competition also released.

The national championship, for the second time, will take place at the Kwame Nkrumah University of Science and Technology (KNUST) from October 10 to 26, 2022.

It is expected to generate the usual thrilling sensation that always grabs the attention and interest of the country.

The regional qualification contests generated a lot of excitement, with more than 100 schools expected to participate in the national contests.

Already, many NSMQ enthusiasts want the defending champions, Prempeh College, to win the trophy for the sixth time this year to equalise the number of times Presec-Legon has won it.

In another interesting twist, the NSMQ sig tune has been given a Ghanaian touch. This has already generated arguments among enthusiasts with some asking the organisers to stick to the old tune.

But others believe the new one is danceable.

Below is the full list of the preliminary stage fixtures: 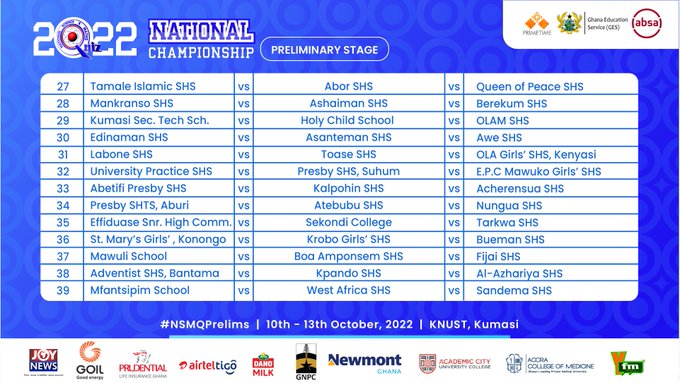